European climate activists have embraced a new method in order to bring attention to their cause—gluing their hands to acclaimed pieces of art.

The most recent case in a series of radical museum protests occurred on July 22 at Florence’s Uffizi Gallery, when two advocates glued their hands to a 15th century painting by Sandro Botticelli.

The activists attached themselves to the glass protecting the painting, according to Uffizi spokesman Tommaso Galligani, and no harm was done to the work itself. The glue was removed with chemical cleaner that doesn’t damage glass, he said.

The activists in question belong to Italian group Ultima Generazione, which arose in 2021 out of U.K. civil disobedience movement Extinction Rebellion, according to its website. The group’s demands include halting the reopening of disused coal plants, cancelling new drilling projects and increasing focus on solar and wind energy. At the Uffizi protest, Ultima Generazione activists also unfurled a banner reading ‘No Gas, No Carbon.’

“If there had not been the special protections glasses for the main masterpieces of the museum, today we would have had a real damage to the work, as happened recently in other museums on the occasion of similar protests,” wrote the Uffizi Gallery in a statement.

Climate activists are protesting in museums across Italy, France and the U.K.

This protest was inspired by a surge of similar actions across the U.K., which began on June 29 when two demonstrators glued themselves to a 19th century painting by Horatio McCulloch at Glasgow’s Kelvingrove Museum and Art Gallery. The activists belong to U.K. climate movement Just Stop Oil, which is “a coalition of groups working together to ensure the Government commits to halting new fossil fuel licensing and production,” according to its website.

“Our venue team responded swiftly to contain the incident and limit any disruption to visitors already in the building, while our conservation team were on site quickly to provide expert advice in terms of safely removing the painting and assessing the damage. Fortunately, there was no damage to the painting itself and only minimal surface damage to the frame,” wrote Glasgow Life, the company managing the Kelvingrove Museum, in a statement.

In the weeks following this incident, Just Stop Oil staged similar actions at prominent British art institutions. A JMW Turner painting was targeted at the Manchester Art Gallery, in addition to a Vincent van Gogh hanging in London’s Courtauld Gallery and a 19th century John Constable painting in London’s National Gallery. Just Stop Oil activists even glued themselves to Leonardo da Vinci’s The Last Supper in the Royal Academy of Arts.

Recent climate protests involving art have also occurred in France. In May, the glass cover protecting The Mona Lisa at the Louvre was smeared with cake by a man who afterwards proclaimed that people were destroying the planet.

It’s yet to be seen if protests involving acclaimed pieces of art will make its way over to the U.S. or New York City, which in the past few months has experienced a rise in radical climate activism.

Prominent art institutions in New York City, including the Metropolitan Museum of Art and Museum of Modern art, declined to comment on whether they are concerned about the surge in museum protests. 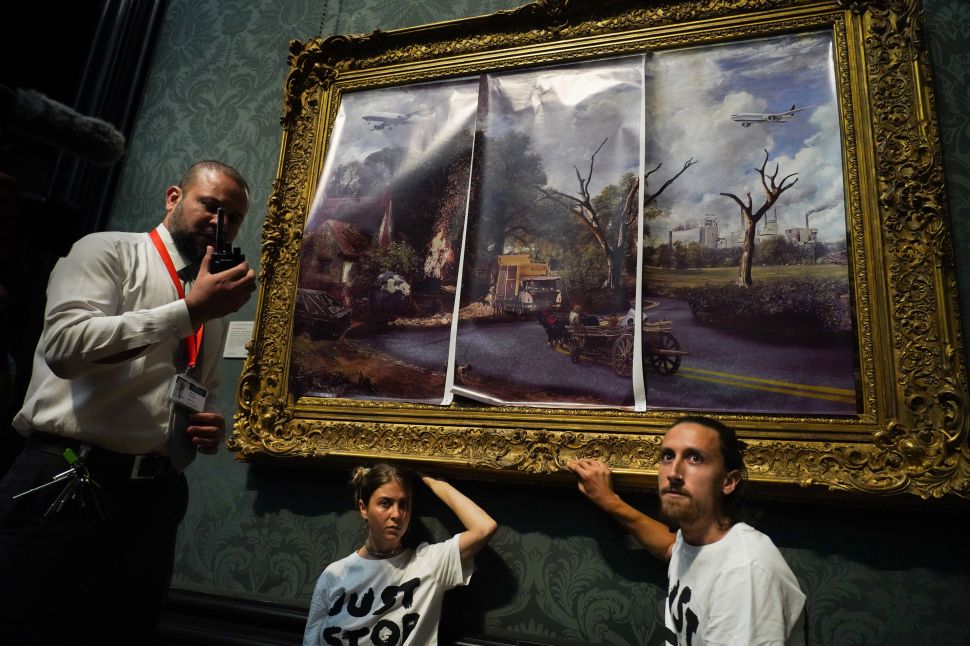